THE PASSING OF THE HON. PAUL THEODORE HELLYER

The Toronto Star tribute to the Hon. Paul Hellyer. 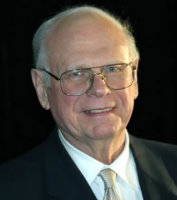 "Paul passed away peacefully last evening August 8 in his home at 6:31pm. Our family was by his side while he was taking his last breaths, singing him a blessing. We are so grateful he was able to be here at home for his last days. We are especially grateful that he was able to celebrate his 98th birthday surrounded by his family."

Mr. Hellyer was born August 6, 1923. He was the longest serving member of the Queen's Privy Council.

First elected as a Liberal in the 1949 federal election in the riding of Davenport, he was the youngest person ever elected to that point in the House of Commons of Canada.

Mr. Hellyer became Minister of National Defence in the cabinet of Lester B. Pearson. This was the most significant period in Hellyer's political career. As Minister of Defence, he oversaw the drastic and controversial integration and unification of the Royal Canadian Navy, Canadian Army, and the Royal Canadian Air Force into a single organization, the Canadian Forces.

In early September 2005, Mr. Hellyer made headlines by publicly announcing that he believed in the existence of UFOs.

In Mr. Hellyer’s address at the Toronto Symposium on UFO Disclosure and Planetary Directions at the University of Toronto’s Convocation Hall he shocked the 500 in attendance by stating: “UFOs are as real as the airplanes that fly over your head. That is my unequivocal conclusion.” Mr. Hellyer will be remembered as a powerful force of change.

Paul's relentless spirit, unyielding determination and a gentleness bounded only by his unfaltering love for the Creator will not be soon forgotten.

Rest in Peace my friend.