After just days of anticipation - following the US Inspector General's memo directing an examination of the Pentagon's now infamous UFO investigations - Rubio may well spell out what the media and the public need to know about UFOs.

Rubio is the Co-Chair of the powerful Senate Select Committee on Intelligence now spear-heading an investigation of UFOs through the office of the Director of National Intelligence. 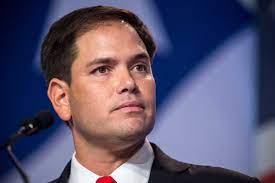 "Senator Marco Rubio believes the truth is out there and he wants to get past the UFO jokes to make sure the national security of the United States isn't threatened in any way, he told Newsweek.

"Dozens of men and women we have entrusted with the defense of our country are telling us about encounters with unidentified aircraft with capabilities we do not fully understand," Rubio said in exclusive comments ahead of a 60 Minutes interview that will air this weekend. "We cannot allow the stigma of UFO's to keep us from seriously investigating these encounters."

UFOs, long dismissed and relegated to movies about aliens visiting earth and breathless message board posts, have begun to shed the farce label in recent years after the release of footage of high-profile U.S. military encounters with aircraft of unknown origin."

This appearance on 60 Minutes by Senator Rubio could represent the final nail in the coffin of the 75 year-long UFO cover-up that has plagued the US military industrial complex, prolonged the suppression of exotic technologies and hid the fact the Earth is being visited by craft of unknown origin.

Further details are available on this controversial issue -