CNN, Politico and others cover US Inspector General Memo on UAP

Toronto [ZNN] ZlandCommunications has learned that CNN, one of mainstream media's most dominant cable news outlets, has published news about a jaw-dropping memo by the US Inspector General. The memo appears to set the stage for an examination of the Pentagon’s management of UAP investigations.

The distribution list in the memo is a dramatic who's-who of the highest levels of US military and intelligence departments; including the Chair of the Joint Chiefs of Staff.

“The Department of Defense's watchdog is set to examine how the Pentagon has handled reports of UFOs, which the department refers to as Unidentified Aerial Phenomena.

The investigation from the department's inspector general was announced in a letter Monday to Pentagon leadership and signed by Randolph R. Stone, assistant inspector general for evaluations. ‘The objective of this evaluation is to determine the extent to which the DoD has taken actions regarding Unidentified Aerial Phenomena (UAP),’"
Why is the Memo Important?
Questions? Yes. Answers, maybe... 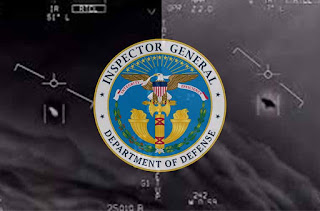 Considering that the last several months has seen an on-going series of political activities in the US Senate, statements by former and current government officials, Senior Naval officials and Navy pilots on the UAP phenomenon - there is every reason for observers to expect a continuation of the ‘drip-drip’ of UAP revelations. This has been predicted by the UAP research community for months.
Are government officials who inherited the 70 year-long UFO COVER-UP now transitioning or perhaps acquiescing to more powerful sources within the US government who want the drips to continue?
Is mainstream media ready for the BIG REVEAL?
Are other international nation states, who have been fully aware of the UAP problem for decades, knocking on America’s rusting door of secrecy demanding, “If you don’t tell the world, we will.”
The US government and its military has always acted in its own self interests.
The only answer to these questions is - we will just have to wait and see.

Journalists who are new to the UAP issue and the international implications of what is happening within the highest levels of governance globally, are encourage to contact Victor Viggiani, News Director of the ZlandCommunications News Network. All communications will be kept in the strictest of confidence.
###